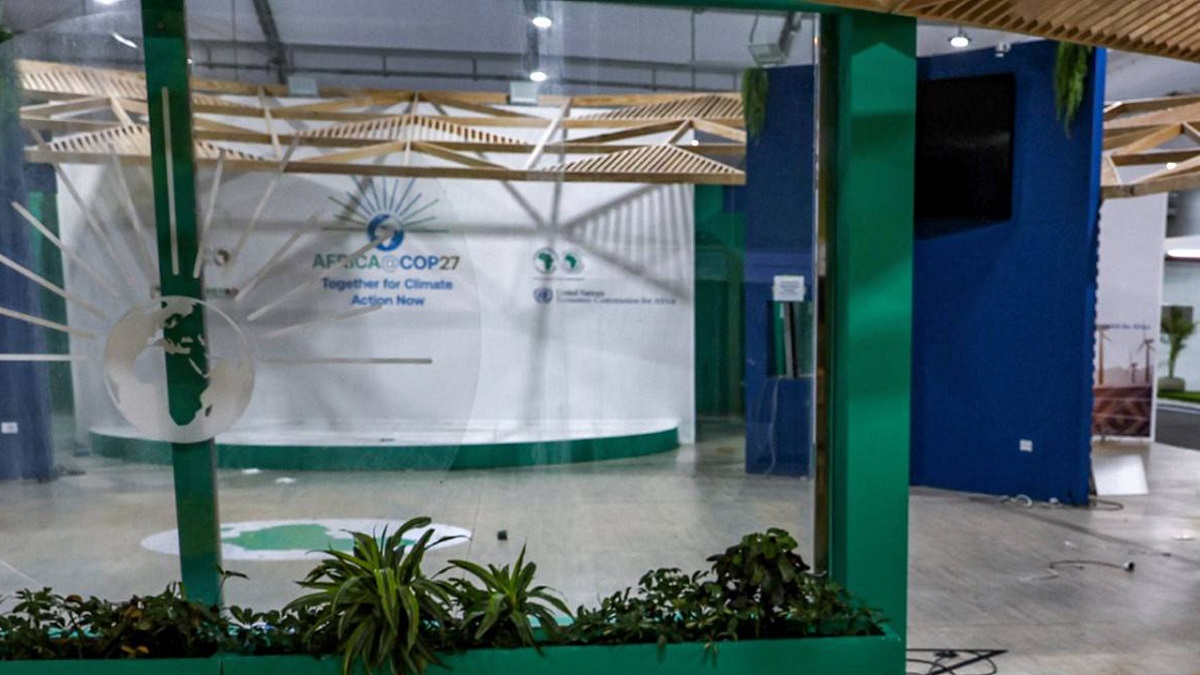 A person walks near the COP27 climate conference at the deserted hall at the Sharm el-Sheikh International Convention Centre, in Egypt's Red Sea resort city of the same name near the end of the climate conference on November 19, 2022. (Photo by AHMAD GHARABLI / AFP)

COP27 host Egypt scrambled to salvage UN climate talks Saturday with the European Union and Pakistan signaling a breakthrough over the contentious issue of “loss and damage” funding for climate-vulnerable nations.

Nearly 200 countries’ representatives have gathered at the COP27 in Egypt for two weeks with the aim of driving forward action to fight climate change as the world faces a worsening onslaught of weather extremes.

But the talks stalled over the terms under which wealthy polluters provide “loss and damage” funding for countries wracked by climate disasters, as well as over ratcheting up ambition in tackling global warming.

After the European Union roundly rejected a document shown by Egypt overnight because of concerns it was weak on curbing emissions, a source from the bloc said at least the loss and damage issue was “agreed” as far as it was concerned.

A European source confirmed, “a deal has been reached on loss and damage which targets the fund to vulnerable countries”.

The agreement was still subject to confirmation at a closing meeting.

Pakistan’s Climate Minister Sherry Rehman said she was “hopeful of a positive outcome” on loss and damage, with the last details still being worked out to get the final agreement over the line.

She said a deal would be the culmination of a 30-year campaign by developing countries.

“If that happens today, that will be a historic reminder to vulnerable people all over the world that they have a voice and that if they unite… we can actually start breaking down barriers that we thought were impossible,” she told AFP.

Pakistan — struck by devastating heat waves and floods this year — chairs the G77 and China bloc of 134 developing nations, which has campaigned strongly for a fund for loss and damage to be agreed upon at COP27.

With around 1.2C of warming so far, the world has seen a cascade of climate-driven extremes in recent months, shining a spotlight on the plight of developing countries faced with escalating disasters, as well as an energy and food price crisis and ballooning debt.

The World Bank has estimated the Pakistan floods alone caused $30 billion in damage and economic loss.

– Temperature check –
But with countries continuing to raise concerns over ambitions on cutting emissions and tackling global warming, the outcome of the climate talks remained uncertain.

An informal coalition of “high ambition” countries has called for strong language on cutting emissions, moving away from planet-heating fossil fuels and reaffirming the aspirational goal of limiting global warming to 1.5 degrees Celsius from pre-industrial levels.

Scientists say this is a far safer guardrail against catastrophic climate impacts, with the world currently far off track and heading for around 2.5C of warming under current commitments and plans.

Colombian Environment Minister Susana Muhamad said to be “viable” the climate talks would need both a loss and damage fund and a commitment to 1.5C with clear signals that the world was not “going back”.

Earlier, the EU indicated it was willing to walk out of the negotiations altogether over the issue.

European Commission Vice President Frans Timmermans warned that if not enough is done to slash emissions and keep 1.5C alive, “there is no amount of money on this planet that will be able to address the misery that will occur through natural disasters, etc. that we’re already seeing”.

– ‘Fragile’ first –
A draft decision document on creating a specific loss and damage fund was published by the Egyptian presidency on Saturday.

It takes some language from three earlier proposals — from the EU, Britain and G77 — and appears to kick some of the thornier issues, particularly over the sources of funding, into next year.

“The draft decision on loss and damage finance offers hope to the vulnerable people that they will get help to recover from climate disasters and rebuild their lives,” said Harjeet Singh, head of global political strategy at Climate Action Network International.

The EU has called for the fund to prioritize the most climate-vulnerable countries as recipients.

They also said the money should come from a “broad funder base” — code for countries including China and Saudi Arabia that have become wealthier since they were listed as developing nations in 1992.

China’s envoy Xie Zhenhua told reporters Saturday that the fund should be for all developing countries.

However, he added: “I hope that it could be provided to the fragile countries first.”

At least 14 killed in two attacks in Burkina Faso

COLLEGE ATTACK: Shooting at the University of New Mexico leaves teen dead and man, 21, hospitalized as suspects ‘ran off’